Steve Osler, CEO of cloud PBX innovator Wildix, pulled no punches when he claimed that traditional PBX vendors are ‘the Walking Dead, sucking fresh blood from the channel’, and described carriers as ‘dinosaurs who are not UC specialists and don’t make any profit’.

“Operators keep copying each other, launching ‘me too’ products with no advantages to customers,” he claimed. “They are Dodos and it is only a matter of time before they go out of business.”

Addressing 400 Wildix partners from across Europe at the company’s inaugural UC&C Summit staged at the World Trade Centre in Barcelona, Osler said the Internet and ‘Amazon Effect’ has also led to the almost total loss of ‘the man in middle’ between supply and demand.

“It is no longer sustainable to be a pure reseller of other people’s products who acts as a simple intermediary and fights a price war that does not bring margins,” he said… 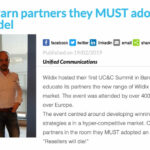 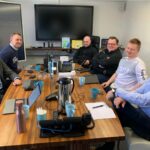