Christian Martini, the owner, and at the same time, the Safety and Design Officer of Technical Park, describes the innovative system which he has installed on his latest attraction, a big wheel with 40 cabins, thanks to his collaboration with GSS Impianti: “Our client wanted a state-of-the-art security system, which would perform to the highest standards on the new big wheel he had ordered from us. The Wildix communication system was modified so as to enable emergency calls from each individual cabin on the wheel, but also an immediate, general alarm from the control centre to all the cabins.

The system needed to be wireless, given that the rotational movement of the attraction would not allow for cabling.
The option of integrating Wildix, as the safety and control system, with the pre-existing wireless control system, greatly increased the safety level of the attraction and allowed for considerable savings because it eliminated the need to install a parallel system, which would have involved double installation costs and double management and control work.”

Bringing enjoyment to others, giving a thrill to both adults and children. This is a job which brings a real sense of satisfaction. At Technical Park they have been doing this since 1980, building attractions and rides for funfairs all over the world.
From small beginnings, this company from Melara (Rovigo), which built small rides for the Italian market, has in time moved on, investing in staff, research and innovation, to become a recognized leader in its field, an Italian centre of excellence which exports rides to major funfairs on five continents.

It has arrived at this top spot thanks to its quest for continuous improvement, which has led Technical Park to push the boundaries and to link up with other leading firms to integrate the latest technology into its products.

The ride in question here is a 40-cabin big wheel, one of which will be installed in nearby New Jersey and one in Kazakhstan.
The running of the big wheel, destined to hoist to romantic heights an endless number of young couples and excited children, is controlled by a completely wireless system.

To integrate into this system a separate emergency communication system capable of connecting each individual cabin with the control centre, careful market research of the sector was undertaken which led to the selection of Wildix as the ideal partner to develop such an innovation.

Thanks to the breadth of experience of GSS Impianti, Wildix’s gold partner in the area handling telecommunications installation and specialized automation, it proved possible to develop a transmission technology which is presently unique worldwide and has rendered even safer one of the most romantic attractions ever seen.

OUR CLIENT WANTED A STATE-OF-THE-ART SECURITY SYSTEM, WHICH WOULD PERFORM TO THE HIGHEST STANDARDS ON THE NEW BIG WHEEL HE HAD ORDERED FROM US. (…) THE OPTION OF INTEGRATING WILDIX, AS THE SAFETY AND CONTROL SYSTEM, WITH THE PRE-EXISTING WIRELESS CONTROL SYSTEM, GREATLY INCREASED THE SAFETY LEVEL OF THE ATTRACTION AND ALLOWED FOR CONSIDERABLE SAVINGS 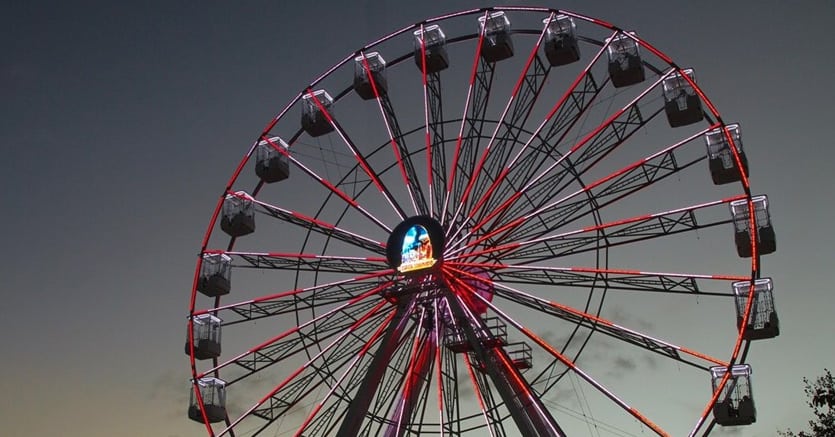